It is a prefecture in the Kyushu region of Japan.
The prefecture are surrounded by Miyazaki Prefecture to the south, Fukuoka Prefecture and Kumamoto Prefecture to the west.
It has a 759km coastline with shallow beach to the north, large bay in the center, saw tooth coastline to the south.
28% of the area was designated as Natural Parks, such as the Aso Kuju and Setonaikai National Parks, the Nippo Kaigan , Sobo-Katamuki, and Yaba-Hita-Hikosan Quasi-National Parks and the Bungo Suido, Jinkakuji Serikawa, Kunisaki Hanto, Sobo Katamuki and Tsue Sankei Prefectural Natural Parks.

Located as part of a National Park, at the southest area of Oita prefecture, it is an Island with only 30 inhabitant. "Japanese Wood Pigeon "a special natural treasure are found on this nature filled Island. Underwater, there is a large coral reef on the North side of the Island, which has been a popular diving site for the local divers for along time.

On the southern tip of Kyushu Island, Saganoseki is located in from of the Hoyo Straits. It is the closest point to the Shikoku Island. Due to the strong and fast current of Hoyo strait and the many large underwater reefs, you can enjoy both macro marine animals and  larger school of fishes.

Located at the southern area of Oita prefecture,Kamae is a beach diving area. The beach has a facility(Oita cultural center) to cater for divers needs (Washing area for diving gears etc.). This facility also has, restaurants and accommodation as well.
Underwater, the maximum depth is only 5mm, but here you can enjoy the beautiful soft corals and smaller marine life.

Not having any rivers running in to the near by ocean, Hazako is popular for it's beautiful clear waters. The beach is also  famous for the sea tutles coming to lay their eggs. Underwater, there are beautiful hard coral reefs and table rock terrains. 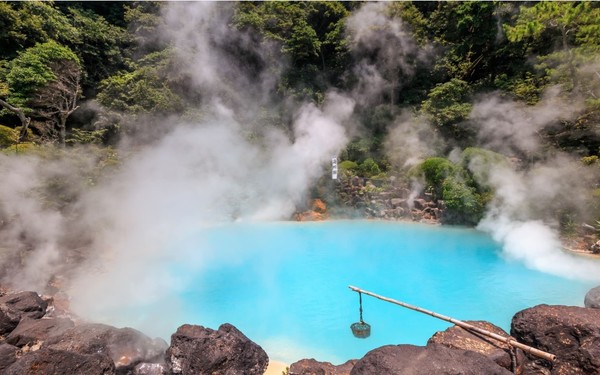 Travel guide by the Japan National Tourism Organization Known locally as Beppu Hatto, Beppu Onsen is a group of eight...